The modern city welcomes the tourists in the neoclassical setting of the Propilei in Porta Nuova and from here it’s possible to go to the Sentierone (the classic walk downtown) and the Church of the old Convent dedicated to S. Bartolomeo, that preserves the beautiful  Martinengo altarpiece, by Lorenzo Lotto

Not far away  is the Donizetti Theatre and the monument dedicated to the famous composer born in  Bergamo.

A  work of great value can be admired along Viale Papa Giovanni XXIII, it is the Monument to the Partisan by   Giacomo Manzù, our illustrious fellow citizen who donated to the town this work of considerable emotional impact.

Nearby we reach the so called “Centro Piacentiniano” – named after the Roman architect Marcello Piacentini who redesigned the Lower Town in the twentieth century:  and so the

buildings of  the Banca D’Italia (Bank of Italy) , of the Torre dei Caduti (the Tower of the Fallen)  (foto 46), of the Chamber of Commerce, of the Palazzo di Giustizia (Courthouse)  and Palazzo delle Poste (Post Office Building)  testify to an urban project that has made a significant contribution to the modernization of that area of the Lower Town where 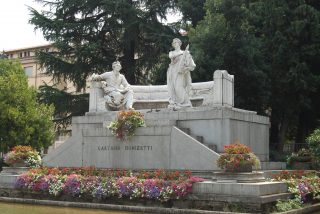 the remains of the ancient Fiera di

Bergamo still existed at the beginning of the 20th century, the only evidence of which is the eighteenth-century fountain of Piazza Dante (foto 47)

The last destination is the Cloister of Santa Marta, or rather the remains of the ancient fourteenth century convent demolished in the 1900s to make room for the 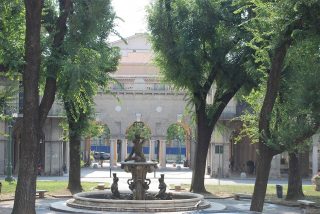